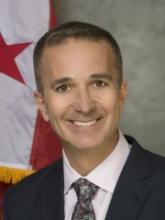 Robert Spagnoletti was appointed in 2012 as the Chairman of the Board of Ethics and Government Accountability (BEGA). BEGA is responsible for administering and enforcing the ethical code of conduct governing District government employees and public officials, and ensuring transparency of District government operations.

Mr. Spagnoletti served as the first Attorney General for the District of Columbia from 2003 to 2006 where he was responsible supervising the District's lawyers, and representing the District in its diverse civil, criminal, family, and commercial legal matters; and was also responsible for the operation of the District’s child support system.

Before his appointment as Attorney General, Mr. Spagnoletti served for 13 years as an Assistant U.S. Attorney where he was chief of the Sex Offense and Domestic Violence Section, prosecuting adult criminal cases involving sexual abuse of adults and children, domestic violence, and child maltreatment.